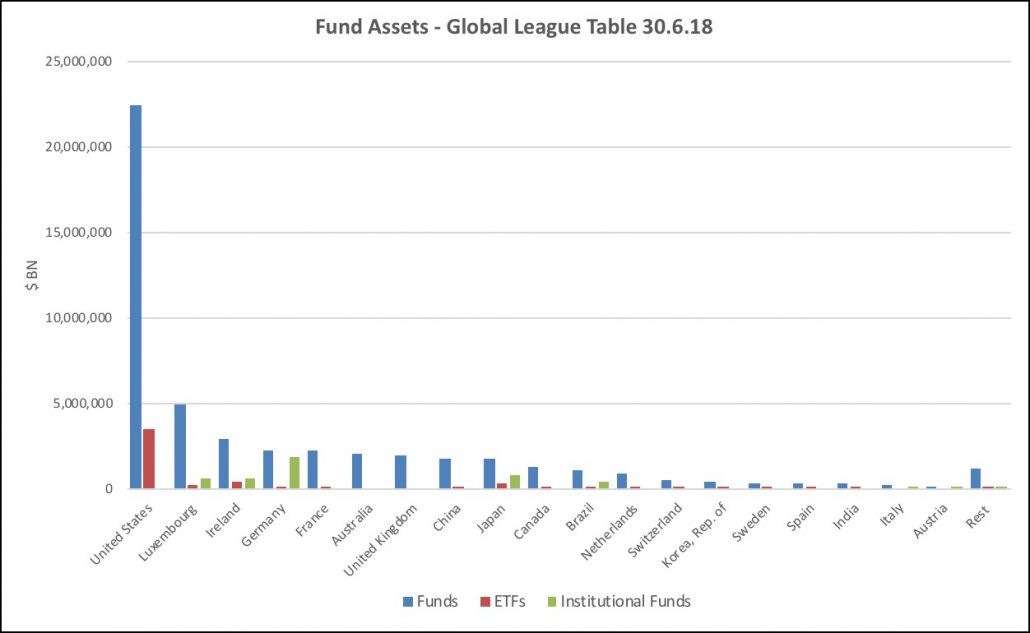 With the ever-growing number of funds and assets piling into offshore markets like Ireland and Luxembourg, the regulators have taken a fresh look at how these companies are run and particularly how the board of directors discharges their responsibilities in light of investor protection and conduct of business risks. Ireland and Luxembourg represent 16% of the Global Funds market of nearly $50TN dominated by the United States.

On 23 August 2018, the CSSF issued Circular 18/698 addressed to Luxembourg based Investment Fund Managers (UCITS Managers and AIFMs including self-managed UCITS/AIF) setting out extensive prescriptive guidance on their expectations regarding organisation, operations and substance, as well as the management information systems and regulatory reporting to be in place to facilitate the CSSF’s ongoing supervision of these firms.

In the interest of improving investor protection and given the evolving and increasing clarity of fund regulation, under AIFMD and the UCITS Directive, the CBI sought to enhance the effectiveness of fund management companies. New guidelines under a series of consultations papers from 2014-2016 formed a framework collectively referred to as CP86 which came into force on 1st July, 2018 to address compliance and effective supervision, including the location of directors, designated persons and records.  Key changes in Ireland are summarised below:

In the Irish guidelines, there is a strict requirement for the company to have a Designated Person (DP) for each of the following functions:

Each Fund ManCo will be required to designate an independent director (who could be the chairperson of the board) to undertake the organisational effectiveness role and who should not perform any of the 6 Managerial Functions. The purpose of this role is to keep the effectiveness of the organisational arrangements of the Fund ManCo under review and it will also include monitoring conflicts of interest and internal audit and effective decisions making within the board. This will be interesting to see how this function can be made to work within existing structures including internal audit and risk management functions.

With Brexit looming, the CBI has already indicated that they would accept equivalence of UK directors as if they were part of EEA. it would appear logical  – with the surge of new applications for new UCITS and MiFID lisences into the CBI and an implied cap  on directorships – of an increase of directors coming into the local Irish market to fulfil the residency requirements although I suspect the supply of local directors like the supply of skilled funds staff to be in scarce supply.

4. Rationale for Board Composition

Each Fund ManCo will need to include the rationale for its board composition in its Business Plan to document how the board as a whole provides it with sufficient expertise to conduct the tasks expected of the directors and, where relevant, the DPs for a Managerial Function.

A Fund ManCo must maintain all of its records in a way that makes them immediately retrievable from Ireland. The final guidance on Operational Issues summarised below clarifies that in this context “immediately” means that documents requested by the CBI before 1pm (Irish time) should be provided to the CBI on the same day and documents requested after 1pm should be provided to the CBI before 12 noon on the following day

The CBI does go further in its 141 page document to outline time commitments for directors, the expectation of the managerial roles of the designated persons and oversight of delegated functions.

The CSSF circular is a little less prescriptive in terms of managerial functions although it does have similar expectations on time commitments (Ireland and Lux both have 20 concurrent directorships as an upper limit with c 2,000 hours for any given director) , local residency rules of directors (2 or 3 directors depending on size in Lux of €1.5bn threshold while Ireland looks at the risk profile of the ManCo to determine the appropriate criteria) and oversight expectations of delegated functions.

The CSSF circular does go into more detail on the requirements to comply with the AML and Counter-Terrorism Financing (CTF) rules including situations where distributors and Transfer Agents are appointed either by the Manager or by the Funds directly. In addition, the circular outlines that staffing requirements of a minimum of 3 full-time employees must be based in Luxembourg and a new guidance on committees including a New Product Approval committee to manage significant risks arising from new offerings.

There is no doubt these new guidelines in our two largest Euopean fund jurisdictions will create new challenges to fund managers, service providers and management companies to ensure the organisational design and new procedures are put in place to ensure compliance with these new standards. The CBI has been very consistent in stressing that although these guidelines in CP86 are not strictly legally enforceable, it will be taken as a measure during forthcoming inspections as to how compliant the ManCo is to CBI rules.

This website uses cookies to improve your experience while you navigate through the website. Out of these, the cookies that are categorized as necessary are stored on your browser as they are essential for the working of basic functionalities of the website. We also use third-party cookies that help us analyze and understand how you use this website. These cookies will be stored in your browser only with your consent. You also have the option to opt-out of these cookies. But opting out of some of these cookies may affect your browsing experience.
Necessary Always Enabled

Any cookies that may not be particularly necessary for the website to function and is used specifically to collect user personal data via analytics, ads, other embedded contents are termed as non-necessary cookies. It is mandatory to procure user consent prior to running these cookies on your website.